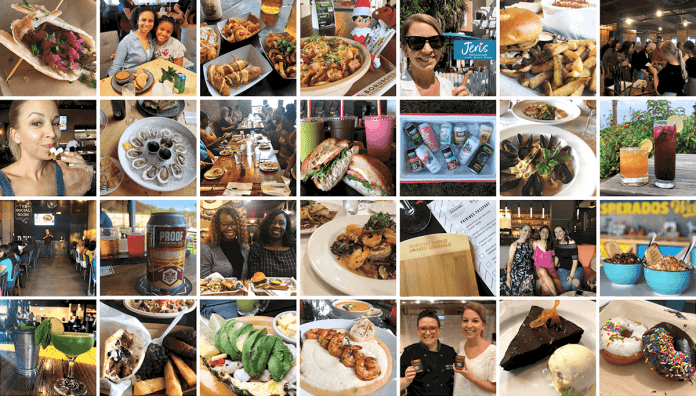 Over the summer we were gaining over 1K members every 11 days, and yes, every member is moderated before they are allowed into the group, a process that takes a bit of time, but helps maintain the quality of our membership. Out of a desperate need for help because I was staring at my phone all day, everyday working on approvals, I added on two admins that were huge foodies and supporters of the group, Becca and April. They’ve helped significantly with membership approvals as well as moderation.

Who knew that PI skills were a plus for this volunteer position? Oh yes, there’s much you all don’t see that we catch, including disgruntled ex-employees posting fake reviews, marketing directors that hype up their clients, while leaving negative reviews for the competition, and so much more. Some people think that our rules (speak to management) lead to a group that’s overly positive, or “dishonest” in some people’s opinions, but what they don’t realize is we’re actually weeding out this fake behavior leading to a much more overall honest space, recommendations you can trust, but more on rules in just a bit…

When we first started seeing a massive increase in membership, a few members from other review sites thought they could come along and control the direction of this new group, and they did not hesitate to spar with me, right there in front of everyone in the group. Although I have never used a review site, I don’t have a problem with them at all and know they are helpful for some people. What I did have a problem with was this small group of members coming along and trying to take-over, especially in a very disrespectful way.

I literally had it out with these people, right there in the comments at the group while parked at Brown’s Kitchen Center before walking into a Chef Nikki cooking class! To my surprise and embarrassment, not only was every student of the sauces workshop a Tallahassee Foodies group member (I had never met other group members before), but they had all seen it go down just moments before. I was probably red from embarrassment and definitely HOT, but to my surprise, they were all on my side! The group I met in cooking class that day have all become friends and have attended nearly every event I’ve hosted. One is now a very good friend and group moderator, Becca! Meeting everyone in class that day and at events since is the biggest bonus of our group’s creation – building a community of like minded people!

This group was created as a way for me to request recommendations for lunch breaks with my friends, it was never meant to be “a review site”. I thought maybe a few people would join and chime in offering recommendations. I never imagined it would grow so quickly and that many people would dive in with a strong opinion on how it should be run. I got hit hard by the “review group” crew, especially in DMs, and sometimes I still do! I was naive enough to think it would just be fun at all times and could remain rule-free. I actually HATE rules!

I quickly realized there was a need to define our purpose and a need for a few rules offering up transparency on expectations of member behavior, as well as transparency on how rule breakers would be handled. Our newly defined purpose emphasizes positivity, hopefully negating the “keyboard warrior” mentality that has run rampant on social media for far too long, and is backed up with our rule that you must speak to management first. This gives an establishment the opportunity to make things right because everyone has a bad moment on occasion.

And guess what, our rules apply to establishments as well. Those that have followed the rules, commenting when their food/service meets the needs of a posted request, have seen great success, yet there are many others that see this space as free advertising, ignoring that one-intro post per establishment, and they have been banned. Our new Facebook page, not the group, is for brands to share their deals, steals and announcements, to keep the focus at “the group” on peer-to-peer recommendations. We have kept the group ad-free so that the space does not become cluttered.

Luckily, members have really taken a liking to this lighter, brighter social space with an emphasis on positivity, as noted by our most liked post of all time, by Michael Haire. We decided early on, that unlike review sites, this would be a social space and that establishments would have a voice in that conversation. For far too long, patrons and establishments have been pitted against one another, dangling their reviews over their head if perfection wasn’t delivered, but I want a space that offers constructive feedback, as though we’re all sitting at a table with one another discussing food and service.

In May, members began asking for meetups. Separately, they were also raving about their latest discovery, The Hawthorn Bistro & Bakery. I put two and two together and after a few conversations with owner Jesse Edmunds, also of Liberty Bar and Restaurant and El Cocinero, we hosted our first meetup at The Hawthorn.

Based on feedback at our Facebook event, people marking “Interested” or “Going”, we estimated about 30 something people would show up, but it turned out to be approximately 100! Jesse and his team are such pros that they were able to scale food and service beautifully. It was a great learning experience for me on prepping restaurant owners in pre-meetup conversations, and The Hawthorn team was so on point, that I don’t believe any lessons were necessary on their end.

The Hawthorn was a fairly new establishment months ago, recently undergoing a concept change from fine dining to bistro and bakery, so as of that moment, our meetup had been their busiest day and members were proud to be a part of that excitement. The Hawthorn is very loved at our group, and our members are so very happy to see them thrive!

I also learned in that moment, after our very first meetup, that gatherings from here on out may need to be ticketed events to throttle attendance, helping restaurants have expectations on how many members plan on attending when prepping food and service. With this group, I never had a moment for training wheels, to learn, develop, establish relationships with restaurant owners. From the moment the group took off, all experiences have been ready, set, run fast! And I’m no event planner, so I’m just doing my best to make sure all goes well.

Since then, we’ve had other meetups varying from educational at our Food Photography class at Madison Social with Emmy award winning photographer Dave Barfield, to a social experience at our Charcuterie and Wine Pairing hosted by the talented Social Catering team at the beautiful venue, The Gathering. We were also kindly invited to a soft launch at Rootstock Pours + Plates, a gorgeous space with amazing tapas and specialty cocktails, and 10 members along with their +1 were invited to attend a “new menu tasting” private event at Railroad Square Craft House. Their new menu is creative, elevated pub grub and all was delicious! We can’t wait to go back again and again!

And let’s not forget that time SōDOUGH noticed we were about to hit 10K members and offered up a free venue and delicious cake for members to get together and celebrate the occasion. Thank you SōDOUGH!

Over the summer we also expanded our channels so people can follow only the content that interests them, keeping our main Facebook group free from clutter.

Tallahassee Foodies Give Back

You all should be very proud of yourselves. Thanks to your “Gobble ’til You Wobble” Thanksgiving T-shirt purchases, we were able to donate $315.50 to Second Harvest of the Big Bend! This foodies group was able to put food on the table for those in need for the holidays! The Director of Philanthropy at Second Harvest took note of my post and commented, “Thank you so very much! Your contribution provided over 1200 meals to those without! Happy Holidays!” Thank you so much to Madison Social for helping organize t-shirt design, purchases and sales at their website.

What The Chamber and Visit Tallahassee Are Saying

Tallahassee Foodies were mentioned at the annual Chamber of Commerce presentation! The topic was exploring ways to fuel the Tallahassee economy that already exist so they do not have to reinvent the wheel. During this presentation, when members of the Chamber audience were asked if they belong to the group, 2/3 of them raised their hands.

At the Railroad Square Craft House meetup, Visit Tallahassee was there to get a taste of the new menu for themselves. I had the pleasure of meeting their Senior Operations Director who gave me his card and said that Tallahassee Foodies has come up in a few of their brainstorming meetings. Hearing this was definitely a 2019 highlight for me!

What Local Foodie Establishments Are Saying

All of these mentions legitimize our group and the impact that we’re having on the local economy. We’re doing great things foodie friends, and it feels really nice!

What Members Are Saying

Tallahassee has grown SO much in the past few years, so I think this group was very timely! I personally, as a member, started out 2019 with a massive “to try” list thanks to group recommendations!

If I didn’t share a post on a restaurant listed here, it’s probably because I went at night and the lighting wasn’t the best (dang early sunset in the winter). I am super wound up about my photography and want to share only the best pics of an establishment’s food.

I’m excited to knock out a few more restaurants in 2020, and then after I’ve worked my way through it all, I can be a repeat patron at some of my favorites I’ve already tried! Cheers to 2020. Thank you all so much for your contributions, and for joining in on this fun foodie ride!