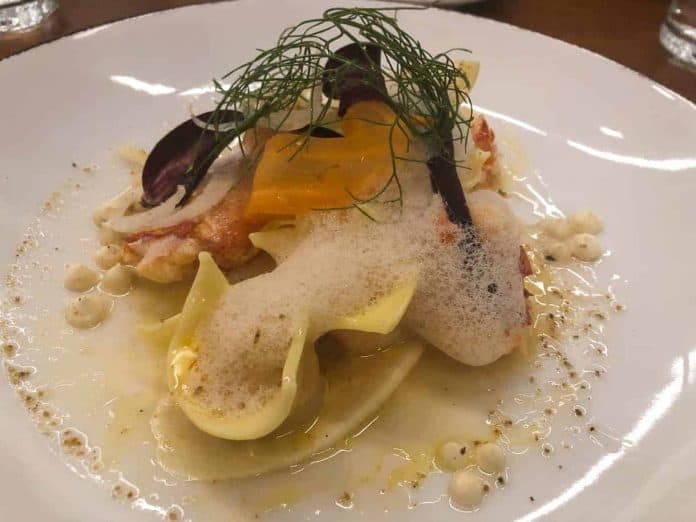 I finally ended up at Il Lusso last night for a friend’s birthday, and we had a blast. For anyone asking where to go for date night, a group of friends get together, or a special occasion, I highly recommend Il Lusso for all. And for anyone asking if it’s worth it, for me, it’s an absolute yes.

We started with a couple glasses of wine, a bubbly rose, and several appetizers that we shared – the Lusso Caprese, Octopus Carpaccio, Frito Misto Calamari, Smoked Prosciutto, Pesto Arancini, Insalata Gorgonzola Wedge and Asparagus with Poached Egg were all outstanding and like nothing I’ve ever tried before. Their sauces are incredible.

For the main course, I had Lobster Cappelletti with parsnip and anise sauce. Oh my, amazing. This is one of those rare dishes where I carry-on gushing with every bite I take. The anise sauce was rich and buttery and paired so well with the pasta and lobster. The cappelletti was stuffed with lobster, along with a few large pieces underneath it all. I’ll definitely end up at Il Lusso again sometime, wanting to try something new as my main dish, but will probably end up ordering this one again. I also tried a bite of my friend’s brussel sprouts and now I fully understand why everyone carries on about them at our group.

For dessert, I had the Chocolate Terrine and it was the best chocolate dessert I’ve ever had in my entire life. If there’s chocolate on the menu, that’s my go-to order. It was rich and dense with a chocolatey ganache-like outer layer and a side of Chantilly cream. My friend ordered the cheesecake and it was beautifully plated, creamy, and full of flavor. Cheesecake is always my runner up if chocolate is not on the menu, and this one was as good as it gets.

I know everyone likes to talk about impeccable service at a fine dining restaurant, but ours was beyond. We had Christian, who we recognized from a previous restaurant because he makes an impression. He is a gem that not only works a large party with ease, but is hilarious. He told our friend that his Lavender Bliss would be out in just a moment, and after we all giggled, without missing a beat, he said excuse me, your “cocktail” will be out in just a moment. Let me tell you, that drink may sound pretty, but it packed a punch of flavor and we very much enjoyed it.

Christian also shared a few fun facts. The restaurant is executive-chef led by Terry White, meaning he is the lead in execution on all things food and service. Also impressive, he is accompanied by their chef de cuisine, George Baldwin, a 22-year-old from Oxford England! Before joining Il Lusso, he was at the 1 Michelin Star Ritz hotel in London! And if you’ve ever tried the desserts at Sage, then you’re in for a treat. Ginna Raymer leads the pastry program at both restaurants and delivers desserts worth talking about. The entire team, accompanied by sous chefs Owen Hardin and Allen Teutonwas, were on point with everything that landed on our table.