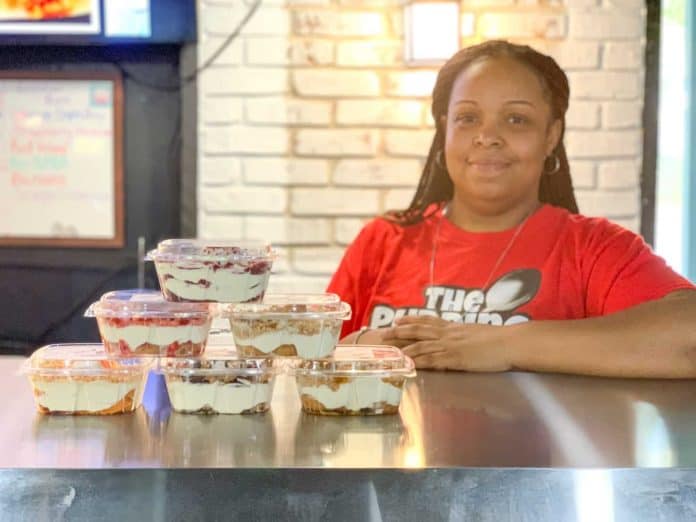 When most of America thinks of pudding, we picture the little boxes of powder that line the shelves of the baking aisle at the grocery store. We’ve become a society of convenience, and the idea of making pudding from scratch isn’t really one that occurs to us. But for Reka Walton, scratch made pudding is her jam—so much so that she created a business around it.

Launched in March of 2020 as a direct-to-consumer product through Instagram and Facebook sales, The Pudding Junkie was created to fill a void in the market, offering something that no one else was. “The concept was to offer a unique dessert that customers can’t find anywhere else,” Walton explains, “and we achieve that by taking a familiar dessert—banana pudding—and trying different ingredients to see what works well with our pudding base.”

Her inspiration actually came from her brother, owner of Cell’s Pudding in Miami, who took a pan of pudding to work for a function and was told that he should start selling it because it was so delicious. After he began selling bowls in February 2020, the overwhelming response that he received convinced him that his sister should do the same in Tallahassee. “I finally was able to start making and selling puddings when my job sent us home to work during the pandemic. It has proven to be one of the best decisions of my life,” Walton explains.

With 14 flavor creations, The Pudding Junkie is indeed doing something unique in a world full of banana pudding. “We’ve stepped outside of the box and have taken pudding to a new level, making something unexpected and memorable,” says Walton. Best sellers include Strawberry Shortcake Pudding, Original Banana Pudding, and Red Velvet Cake Pudding, though the menu makes choosing just one favorite difficult. “People love the fact that we offer so many flavors. They also like the idea of being able to have it delivered to their door. We’ve been told that our puddings are very addictive, and this is why I named the company The Pudding Junkie.”

Naturally, the ideas for the recipes must come from somewhere; and Walton is open to suggestions. “Several of our flavors came about due to customer requests,” she says. “Others are ideas that my brother and I created together. Once we come up with an idea, we have to figure out the best way to execute it. From there, family and friends taste test it to see if it passes or fails.”

While it may be her first foray into the food industry, The Pudding Junkie has proven successful—even in the midst of a pandemic. “I personally delivered to customers and met them at neutral locations to get their pudding fix during the height of COVID,” Walton recalls. “I believe the fact that they could get great dessert delivered to them during a time of uncertainty helped provide a sense of comfort, and this kept customers coming back for more.”

Over the past 16 months, Pudding Junkie’s sales have made a brick-and-mortar location necessary, and Walton secured a spot inside G&G Restaurant at 745 Apalachee Parkway to sell her addictive puddings.

Reviews At The Tallahassee Foodies Facebook Group Are In:

Michael Haire – “Went by today. Bought two of everything they had. Tried ‘em all. They were wonderful. My favorite was the bananas foster pudding. Just the ticket for these hot days and nights. Eat some for dessert. Then save some for the porch later. It’ll be perfect.”

Whitney GiAna – “My Mom had the pleasure of shopping at The Pudding Junkie & purchasing the Red Velvet Pudding! In her words, ‘Oh my God. It’s delicious’ 🤤 We will definitely be supporting again soon!”

Denise Lynne Dennis – “Guys. On Saturdays thepuddingjunkie has gluten free options. Bananas foster is my favorite dessert in the world and this pudding chef’s kiss! Best dessert I ever ate for breakfast. Now that I got mine, you can go get the rest! So many delicious gluten free and regular options. She’s located in the Caribbean restaurant next to Chili’s on the parkway. Tell her I sent you!”