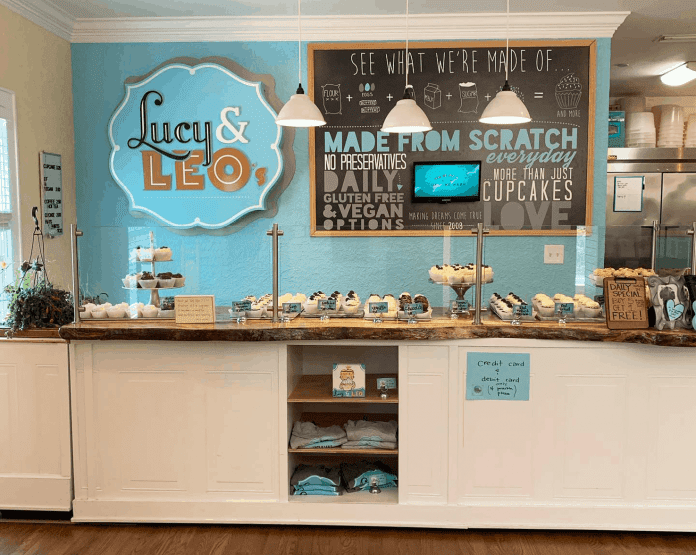 Nestled in Tallahassee’s vibrant Midtown, Lucy and Leo’s Cupcakery has been a staple for the city’s sweet tooth for over a decade. Unfortunately, after twelve years of delighting their community with zany and delicious cupcakes, Jean Bates and Paula Lucas are hanging up their aprons.

After graduating FSU with her MBA in 2008, Jean, along with her co-owner, Paula, launched the sweet shop in the bitter recession, with the mission of providing “inexpensive luxuries” to their home city. Named for their two neighborhood dogs, Lucy and Leo’s is beloved for their vegan and gluten-free options, making the sweet treats accessible to all. Their love of the two pups spurred them to partner with the Animal Shelter Foundation, for whom they host benefits.

In addition to their philanthropic efforts, Lucy and Leo’s is remembered for their appearance on Food Network’s Cupcake Wars. This memorable appearance brought notoriety to the shop, and the owners remarked that Food Network fans have traveled from far and wide to sample the delectable Margherita or Hummingbird cupcakes.

The Cupcakery shared its space with the beloved local bookshop, Midtown Reader, a partnership the team described as “phenomenal” and one they will certainly miss. I’m sure the partners have big plans for the future, and of course we’re selfishly hoping for some sort of local foodie endeavor. Whatever the future may hold, we sure do wish them well. If I ever saw their food truck, a Tallahassee staple, in our neighborhood or at food truck Thursday, it was ALWAYS a “yes” to a four-pack of variety cupcakes. The Cupcakery will officially close its doors on September 26th.

Check out their submission that landed them on Food Network’s Cupcake Wars in 2011!