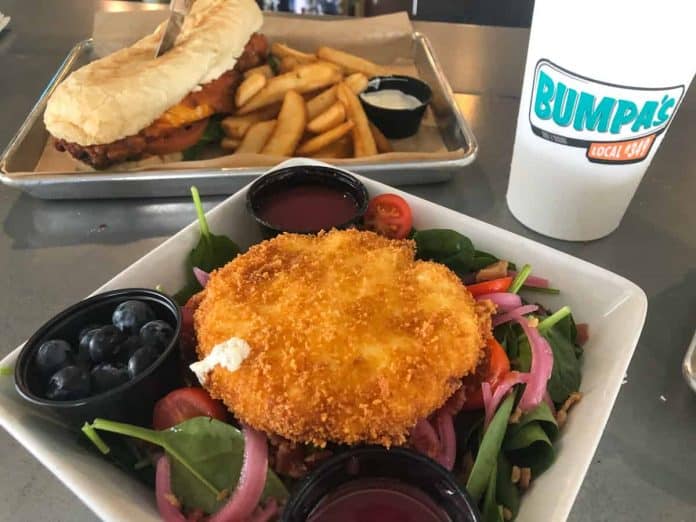 Bumpa’s Local is a solid home run, sports pun intended. I FINALLY made it out and Bumpa’s is so worthy of all the rave recommendations they’ve received at our Facebook group!

Located on Capital Circle in the previous CJ’s establishment, Bumpa’s is a place to relax with friends and family for an amazing selection of pub grub! We sat at the bar that opens between the patio and restaurant, on a perfect breezy almost-Spring day. If this place were around before I had kids, I’d be on that patio having a beer every day! And that’s exactly what a lot of Bumpa’s fans do because Nate had their beer of choice popped open and on the table before their regulars even made it though the patio door!

An amazing contributor of our group, Daniel Pineau asked members to comment with their favorite Bumpa’s menu items, but there were so many highly recommended, that I still had no idea where to begin for my first visit, so we took a poll! The brussel sprouts have been talked about so often, that they were an obvious choice for me, so what did I do, I totally forgot the obvious choice! I was so focused on the other top spots in the poll, that the obvious slipped my mind. Ughhh. Maybe next time, and there will be a next time very soon.

For apps, I opted for the giant pretzel and top poll recommendation, Bumpa’s rolls. I’m becoming quite the Tallahassee pretzel and beer cheese connoisseur and Bumpa’s ranks up there highly with the best I’ve tried!

I had no idea what to expect with the Bumpa’s rolls. I assumed when discussed at the group that they were dinner rolls, so I couldn’t imagine what all the fuss was about, but they are far from a dinner roll. These fried eggs rolls are stuffed with an amazing house-made pimento cheese and small bits of corned beef with a side of what tastes like a Thai chili sauce. Such an unreal combination!

For our main lunch entrees, missing Po Boy’s, my husband opted for their buffalo chicken po boy, and I went for the goat cheese salad (let’s face it, I’m in it for the fried cheese)! The buffalo chicken po boy was fantastic, served on a super fresh ciabatta roll and perfectly smothered with their hot or mild wing sauce.

But that salad though! Didn’t know I could love a salad so much! I ordered a goat cheese salad recently at a fine dining establishment and there was one tiny little ball of cheese on my salad. I like a little cheese in every bite. Would you look at that goat cheese ball? More like a goat cheese patty that fills the entire bowl. I should have covered the salad in the blueberries and blueberry vinaigrette dressing with a kick of lemon for the pic so you can get a better perspective of its amazingness! Buried under all that cheese and fresh spinach is cherry tomatoes, bacon and pickeled onions!

Have you made it out to Bumpa’s yet? If so, comment with your favorite menu items! I’ll be sure to try new things at each visit!