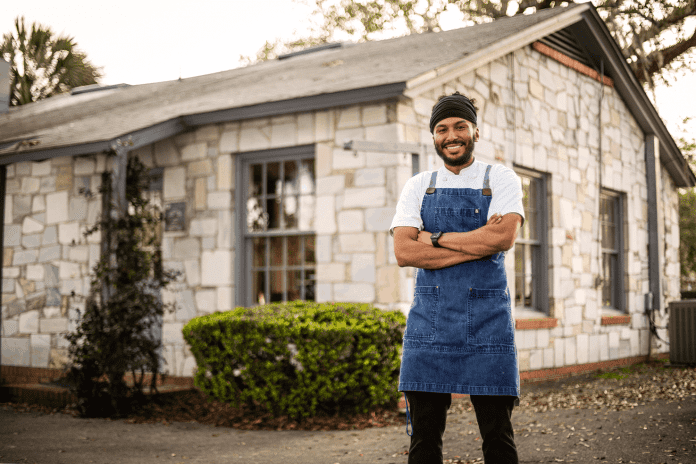 For immediate release!!! There is a new, unique dining experience coming to KB Kitchen in Tallahassee. So you know that announcement that Chef Leon has been teasing all week???  My foodie friends, I’ve got the exclusive just for you all!  And why do we get the exclusive? In Chef Leon’s words, “The Tallahassee Foodies members have supported me immensely, and THEY are the reason I am able to embark on this next chapter in my life”!

When Tallahassee Foodies was a brand new baby blog, I visited Kool Beanz and turned that moment into one of my very first blog posts.  Most of that Kool Beanz article was inspired by my interactions with Chef Leon, and I was so happy to share my experience.  I didn’t introduce myself, because A. I don’t usually introduce myself unless I know the person already, it seems a bit pretentious (it’s not about me at Tallahassee Foodies), and B. We were so new that I imagined his nicest response would have been, “Tallahassee Foodies, who’s that?” LOL.

However, I did have quite a following at our Tallahassee Foodies Facebook group already, so I shared the post to our members and it took off, getting a lot of traffic.  His popularity in Tallahassee and elsewhere has been growing so much over the past couple of years, including a massively engaged post at the group just last week sharing his amazing, in-home private chef dinners.

And now for the announcement, let’s go!!! Here is the scoop on Chef Leon’s latest endeavor, for Tallahassee Foodies only, courtesy of Chef Leon’s team:

Tallahassee chef Leon Brunson worked for four years at Kool Beanz Cafe when, like many other establishments last year, the restaurant was forced to close due to the pandemic.

Brunson has since pivoted his career as a chef by hosting free virtual cooking classes, private events and offering catering services. Now, at just 26 years old, he plans to elevate the experience by opening his very own restaurant.

Brunson has purchased KB Kitchen in Tallahassee from Keith Baxter, a colleague from his time at Kool Beanz Cafe. Brunson plans to use the charming lakeside cottage as a space to continue his endeavors as a chef and create unique culinary experiences for those who dine with him. This intimate approach will allow him to cater specific menus toward his guests and connect to the people he’s serving. “Focusing on small groups of people will allow me to emphasize time spent on the quality of food and technique … and focus on hospitality,” the chef-owner says.

The restaurant, called “Leon’s”, will open in Q4 and will specialize in catering, private dinners, cooking classes and events. Brunson will use the space to continue his involvement with local nonprofits and charities, including Second Harvest, and will also use the extra room to elevate the visual production of food with the help of local photographers and filmmakers.

As far as cuisine, guests can expect a substantial Southern influence, as well as nods to Brunson’s two trips to Japan and his Mexican roots.

The chef-owner’s mission is to connect people to real, fresh and flavorful food, inspiring them to look deeper into cooking and focus on the roots, tradition, ingredients and techniques that are used through generations. And he plans to do just that by opening Leon’s.

The community can learn more by following Leon on his Facebook page or by visiting his website. Leon’s will be located at 1611 North Monroe St. Tallahassee, FL 32303.