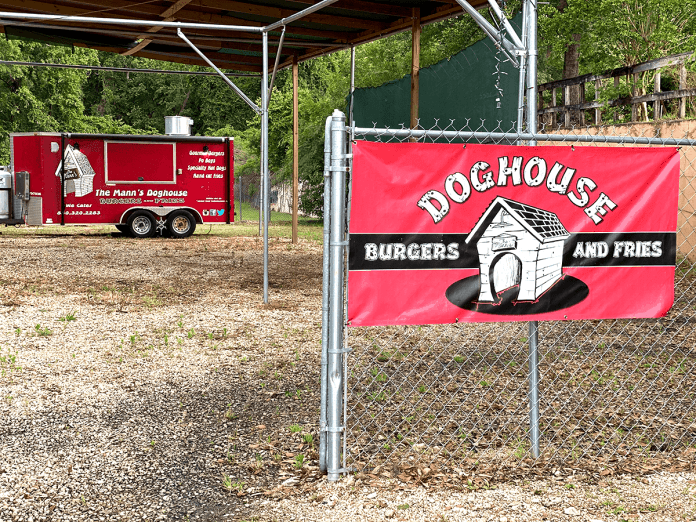 A few of our Tallahassee Foodies paparazzi started to notice a development on the Northeast side of town, so we figured it was time for an exclusive announcement that I’ve been so excited to share on behalf of Mann’s Doghouse!

When Scott Mann first opened up his food truck on the Northeast side of town six years ago, it was an instant hit and his brand has gained serious momentum ever since!  However, this recent setback has caused many restaurants to get innovative and rethink their strategies.  For Scott, that meant going back to his roots, his food truck!

The Mann’s Doghouse grew from a food truck to store on the corner of campus where most of his customers are now long gone – employees usually occupying that area are now working from home and students are out of town with family as they finish up school remotely. The stay at home order may have halted his momentum, but it certainly hasn’t stopped his local regulars from craving those delicious Mann’s burgers and dogs, the very first viral sensation at our Tallahassee Foodies Facebook group last Summer. And I do mean viral! Recommendations led to a ton of traffic in his restaurant, members were bumping into each other in line, and ordering from pics on their phone that other members had shared at the group.  Our group literally became a Mann’s Doghouse feed for a very long time!

Mann’s special sauces combined with his premium all beef ingredients and arguably some of the best fries in all of Tallahassee, became a staple for many. Now with the new social distancing order, going back to the food truck seemed like an obvious move, and at a location some of his early adopters may recognize.  Many people don’t know this, but his very first food truck stop ever was in November 2014, when King Frazier started setting up their Christmas trees on Thomasville Road, just past the Walgreens in the same lot where you pickup ice.  Guess where the Tallahassee Foodies paparazzi spotted his truck this week?  In that same exact lot!  He’s carved out a permanent space for himself, so on Monday, get ready to step into a socially distanced line as we all celebrate the reopening of the Mann’s Doghouse Food Truck, back to his truck and back to his very first location ever.

Scott will be serving up his fan favorite burgers, sausages and hot dogs with some weekly specials thrown into the mix. Hours will be 11am to 7pm to start for lunch and dinner. Service options include drive up, call ahead for a scheduled pick up, or delivery services. If all goes as planned, Scott hopes to expand his hours and menu. For more information, or to see what’s on the menu, check out The Mann’s Doghouse Facebook page or call (850) 320-2283 to schedule an order.