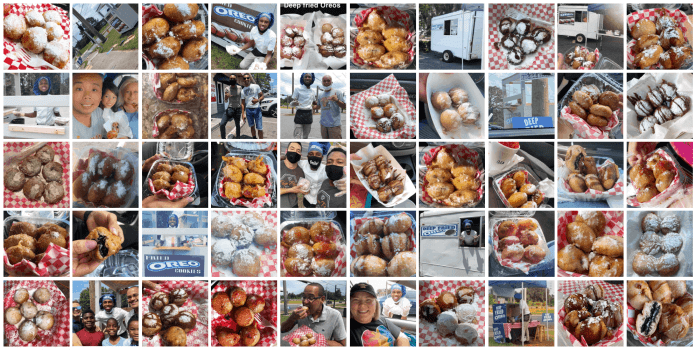 You all have no idea the impact you are making on people’s lives. NO IDEA. These are very emotional times… so feel good moments like this, feel SO VERY good. I live on the Southside of town and while cruising around after lunch with my husband, I passed the Dollar Tree and knowing our beloved “Oreo guys” were near, we did a couple of turns around the block until we found their new truck.

I never introduce myself anywhere I go, but I just couldn’t help myself… I had to say hi this time. No one was in line at 3pm on a weekday afternoon, so all I said was, “Hi, I’m Jennifer, I have a group on Facebook called Tallahassee Foodies”. Dee (Demetrius Murray) runs out from the inside of his truck and leaning towards me from a social distance said, “You have no idea, no idea the impact you all have made on my life. You have no idea”! He said, “I was on the verge, do you understand what I’m saying?” I shook my head yes because, although I don’t know exactly what he was on the verge of, because he never finished his sentence, what I did understand is that “the verge” wasn’t good, and because of you all, there’s been a significant turning point in this young man’s life.

Dee was so excited to share, “I have people coming all the way from the Northside of town, probably from nice neighborhoods, some of them say they’ve never been in this area, coming all this way for my Oreos! For Oreos! Do you understand what I’m saying? Do you understand the impact you’ve had on my life! You are bringing people together!” At this point, I understood what he was saying, and then came the tears I was hiding behind the sunglasses I kept on my face, even though it had started to rain.

I could listen to Dee’s passion all day long! He said, “there were three young boys walking by the other day, about 13 or so that live in the apartment complex behind my stand. I asked them what they were up to, and they said, they now want to be legit like me, because they’ve seen what I have going on over here. They see the long line of cars waiting to buy Oreos from me, they see me hustling no matter how hot it is outside, they see me making money the right way, and they want to do the same!”

Dee let me know, he wasn’t always doing things the right way, it was another unfinished sentence that was understood, but he’s been making it right for a while now, and “feels blessed”, to use his words, by the opportunities this group has provided for him. He kept crediting the group for his success, I kept crediting his smile and amazing Oreos battered in his grandma’s recipe, and somehow I think we just met in the middle, that perhaps things just aligned they way they were supposed to – the group I created, his amazing Oreos, his enthusiasm, and a community that has rallied behind him. He also gave us a little tour of his truck, and said everything we see was funded by the Foodies. He’s got wheels now (YAY!!!), a bit of coverage from the heat, and an air conditioning unit! He is so appreciative of you all!

We asked about his brother, and learned they’re not family brothers, but as Dee says, they are “life brothers”. Dee said, “Marquis had nothing, and I had less, but he was better about money and was always teaching me.” He said, “every penny we’ve ever made, we split, and I’m making money the right way.” He promised that he will make us proud, but I assured him, he already has! I am so moved by him, so moved by our moment! My mom was dog sitting while we went out for lunch because my crazy mutt hates storms and chews everything in sight. My mom couldn’t imagine why I ran through the front door crying, just trying to get the words out and tell her all about Dee. “I finally met Dee”, and she knew exactly who I was talking about! He thinks we’ve made an impact on his life, but he’s the one that’s had an impact on mine.

The Evolution Of A Viral Sensation

I’m sure all of you have been following the evolution of Love Gurlies, also fondly referred to as “The Oreo Guys” at the group, but in case you didn’t know, here is how it all kicked off:

A few posts came through early on raving about Love Gurlies deep fried Oreos, fried in their grandma’s batter recipe. A lot of the images featured the Love Gurlies brothers in their modest tent made of PVC pipe and banners.

Dee’s stand blew over in the rain, Kristin Nichole mentioned in the comments at someone’s Oreo post, and I did a separate post to bring more attention to it. At this point, the Oreo posts really started rolling in, almost constantly!

Kennedy Davis started spreading the word about a GoFundMe to provide a better stand, something more sturdy, before the hot days of summer began to take full effect. Again, the Oreo posts started to hit new levels at the group!

Last Saturday, as if it were foreshadowing, one post came through, we really need to get Dee a better set up, and people started contributing more to his GoFundMe so that he could purchase an A/C unit, fans, and a cooler for water. The next post comes through, Dee has a long line of cars, but it’s hot out, and he’s pouring water over his head, looks dehydrated. The next post, Dee has passed out, and EMS is on the scene.

While we were anxiously awaiting info on how Dee was doing, their GoFundMe soars, exceeding their hopeful goal. The Gurlies take Sunday off to recover, and on Monday, Dee and Marquis show up to their location with a trailer on wheels, a nice sturdy stand built inside to support his fryer and supplies, and an A/C unit powered by a small generator.

Have you visited The Gurlies yet? Their Oreos are amazing. The soft Oreo becomes a part of the fried batter around it, making it a nice little pastry. After you get your basket of Oreos, dress them up with your favorite condiments – cheesecake, fudge, and strawberry frosting and a shake of powdered sugar. My wish is that they full on expand into more fair food items, especially funnel cakes! Yes, please!!!

When you are facing the entrance of The Dollar Tree on South Monroe, look to the left across the street at the complex of little shops. You will find The Gurlies tucked in to the left of that shopping complex.