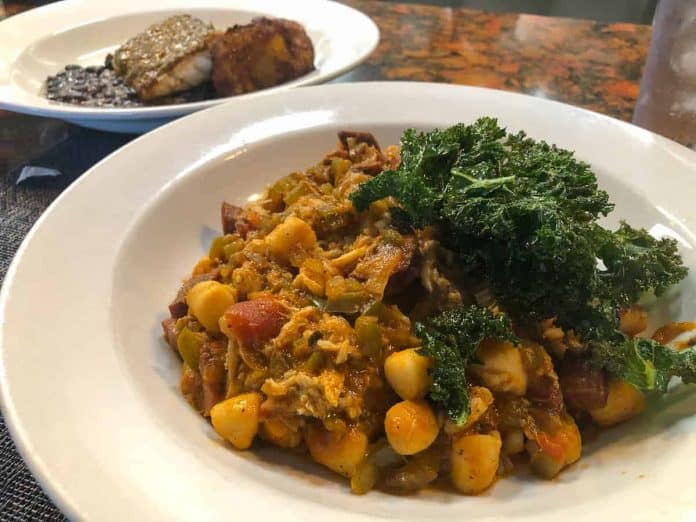 I went to Kool Beanz Café today! It’s been a while and first bite in, I instantly realized why they are still so very popular after 20+ years in business! The parking lot was packed at 1:30 in the afternoon on a Friday, at a time most restaurants have died down from a lunch rush. We asked the gentleman seating us if this was normal and he said, “no, due to the 4th of July holiday, we’re actually a little slow”. Kool Beanz is still killing it, proving long ago that they are more than just a trend.

I started the foodies group because, now that our small kiddos are getting a little older and we’re getting out-and-about more than ever, we really needed suggestions on where to go next. A friend suggested Kool Beanz for a super rare lunch date with my husband and it was the best suggestion ever! People carry on about Kool Beanz at the group, and their recommendations are so on point!

I remember chef Patrick Resha of Hawthorn saying at the group, “When I first got serious about cooking professionally I used to sit through lunch [at the counter] and eat slow. That food was space magic, definitely one of the best seats in town.” Based on his recommendation, instead of opting for the window seat with the best pic lighting as I usually do, we ate at the bar and he was right, the chefs are magicians! My husband and I often forgot to chat with one another, just mesmerized as we watched these guys work, putting out one amazing dish after another. They were singing under their breath, probably assuming we couldn’t hear, but thank goodness I could because I loved their enthusiasm. I REALLY wish I could’ve jumped back there and taken pictures of everything they prepped, but I always try to be super discreet with my camera.

I ordered the jerk corvina fish, mofongo cake, with coconut black beans and cilantro rice.  You could tell everything was super fresh, made from scratch, and the jerk sauce was bursting with flavor! Every bite was fantastic! My husband has a shrimp allergy and they happily made him a seafood jambalaya without the shrimp, while adding in extra scallops and crab claws. He often has a quip about flavor or portion, but he was so stuffed and excited about his meal!

Leon, one of the chefs on the line, was plating a linguine dish and when I asked him what it was, he didn’t just give me the name of the dish, but took the time to detail every ingredient in it (shrimp, tasso ham, mushrooms, roasted garlic). A few minutes later, to my surprise and near screeching delight, a good size sample landed in front of me and it was fantastic! As if that wasn’t nice enough, when he remembered that my husband has a shrimp allergy, he prepped a good size portion for him shrimp free! I asked if this dish is on their menu often, as their menu is seasonal, and lucky for me, it’s one of the three dishes that stays in constant rotation because it’s so popular!

We got to talk to the guys a bit and they are culinary trained, and love what they do. The menu changes keep them challenged. I asked if they undergo a training session as the menu transitions or if they just follow a recipe and they told me that there are no recipes. They are trusted and given the freedom to create the dish from the menu when it’s handed over to them. After tasting each dish, it’s obvious why they are given this creative freedom!

And their amazing dessert. Let’s just chat about their amazing dessert for a moment. My husband and I both wanted the dark chocolate flourless ganache cake with flaky sea salt and the big question was, order two or split? We opted to split and when he started taking big fast bites, he got a warning and a glare out of me. The ganache cake was melt in your mouth incredible. I had no idea what I was eating when I took a bite of their whiskey raisin ice cream that came on the side, and thank goodness I didn’t because I loved it! It’s one of those genius things that I would have never ordered had I known there were raisins, yet it was the perfect pairing with the cake.