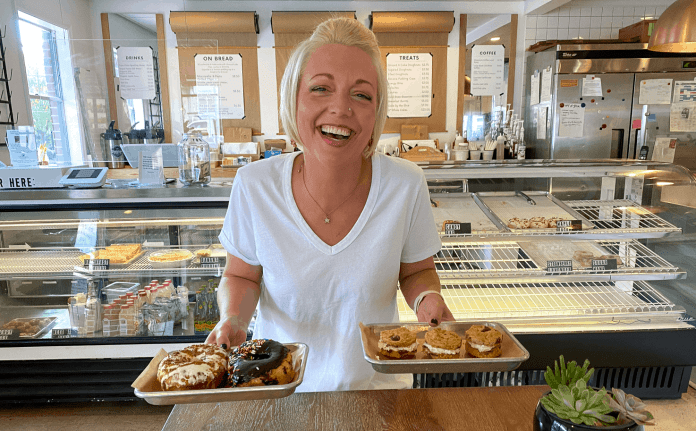 When I heard the news, first I cheered for a few minutes, and then after getting past the initial excitement, I immediately launched into a thousand questions for Matt Thompson of For the Table Hospitality, and Jeri Madden of Jeri’s Midtown Cafe. Here’s the scoop, in their own words:

“Last year I slapped my name on the side of Jeri’s and have made so many deep connections with Tallahassee, my team, and everyone that has supported me. Jeri’s is doing amazing and still throwing a whole lotta “love on a plate” for as long as it can, but (there is always a but)… I am expanding”, said Jeri.

Jeri continued, “I have been friends with the For The Table Hospitality team for a while now and have admired them from a far (well, in some cases, from right down the road). Starting Monday, October 19, you will see my face in SōDOUGH AND in Jeri’s all week long. So here’s to love on a plate… now including, love on a doughnut or two:)”

About the latest addition to their team, Matt added, “We are excited to have Jeri joining us at SōDOUGH. Her energy is infectious and her team-building is second to none. Although Jeri is going to be bouncing between SōDOUGH and Jeri’s, spreading the love at both locations, long term, the hope is for her to help us grow in other areas.”

“When we sat down and discussed the move, we knew Jeri’s Midtown Cafe would still be a priority, but with where she is in her career and where we are as a company, the fit was perfect. We know for some this may be a little unorthodox but, hey, that is what we do. We are a creative bunch that look for solutions that work for everyone and this one definitely checked a bunch of boxes”, said Thompson.

I met up with Angela Walker, partner of SōDOUGH Baking Co. and Social Catering and Events, for her thoughts on the exciting new addition to their team! Angela said, “we’ve always admired what she’s doing, and vice versa. During this crazy time, it’s brought us even closer!”

Angela continued, “We’ve been able to share in the joys, the successes, and the hard times that we’ve been through, and we just found a way to help each other out moving forward. We all bring different strengths to the table. What Jeri has accomplished for her team and for her customers, that’s exactly what we’re looking for here at SōDOUGH”!

Who else is beyond excited about the surprise addition to the SōDOUGH family? I just can’t wait to go in there and place my Lani, Basil Lemonade, and a doughnut on the side order from Jeri!

Thank you so much to Matt Thompson and Jeri Madden for saving this news just for us! I’m not a journalist, just a blogger having fun around town and chatting about my foodie adventures as I go, so getting to share this news was an exciting, major media moment for me!