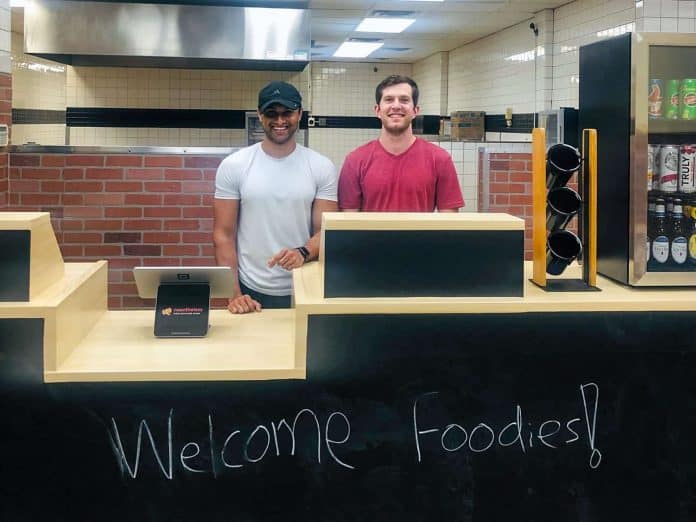 People look right past them as they walk in asking for the owners, and their response, “we are the owners, how can we help you?” We have a couple of young entrepreneurs coming into the restaurant business at Naantheless, located in the Aveda complex on the corner of Ocala and Pensacola, and I’m beyond excited about their unique concept.

And now for a fun surprise! Tarun Gupta and Drew Rudolph, owners of Naantheless, have decided to sneak up on you all with a soft open next Friday, September 18th. They held onto this announcement so that hopefully their soft launch will be soft, so if you’re in the area and craving Indian food like you’ve never had before, make sure you stop by and say hello. They will have limited hours from 11AM-3PM on weekdays only for now.

I was so excited to visit yesterday, have a chat with the owners, and they gave me an exclusive sneak peek of their brand new menu.  I honestly think they have the perfect combination of unique concept, price point, location, and super tasty food at Naantheless – Indian street food that is affordable and quick for the local college student and employees in the surrounding areas, yet still authentic and true to the Indian food Tarun grew up eating.

And here’s a fun fact for your all. Their menu is 100% vegan/vegetarian. It wasn’t their intention initially to create an entire menu that was vegan/vegetarian, but while developing their recipes, everything just naturally gravitated in that direction because authentic Indian dishes are often vegetarian.

After graduating college, Tarun and Drew went their separate ways, but Taran’s dream of owning his own Indian restaurant was something he couldn’t put off any longer. His friends in Silicon Valley where he lived after graduating college thought it was a great idea, so he took their advice and left everything for a move back to his hometown of Tallahassee.  Next step, talking his best friend Drew into making the leap with him to help make his restaurant dream a reality.

They secured a lease on their location back in January, and after two months of settling into their new space and working on recipes with Taran’s mom, COVID hit and they decided to put off their opening a little longer. Here we are, six months into the pandemic with no end in sight, so they’ve decided now is the time to go for it!

When we stopped by to take pictures yesterday, they were nice enough to let us have a taste test of their menu favorites – Handmade Samosas and a Paneer Wrap. Paneer is their protein of choice, a fresh cheese similar in consistency to tofu, found in traditional Indian dishes and it was super tasty mixed with onions and peppers in a flaky wrap.

The Samosas were the perfect thin crisp on the outside, and the firm spiced potato filing on the inside was delicious! They’re set up for quick service with two main sauces that you’ll find throughout their menu, and I just couldn’t pick a favorite.  Dip in the brown sauce, and it’s my favorite, dip in the red sauce, and now it’s my favorite, and so on the entire time I was dipping lol.

And now, your exclusive first look at their menu…

Their menu is super easy to read, with suggested ordering based on hunger level which I loved, ranging from snack-mode to hangry. I didn’t see anything on their menu over four dollars and we were stuffed from the two menu items we sampled.

Their food is FANTASTIC, and when Taran asked us our impression of everything, I said, “I don’t really know what to compare it to, but I absolutely love it”. He said, “that is exactly the answer we’re looking for, that you don’t have anything to compare it to!  We want something that’s completely unique, like nothing you’ve had before, yet still quick and affordable”.

Mark your calendars for their soft launch next Friday, September 18th! I can’t wait to hear what you all think of Naantheless!