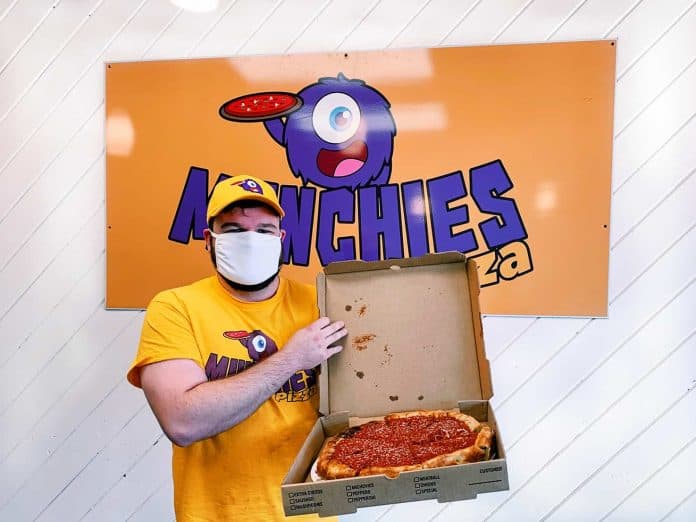 Munchie’s Pizza is celebrating the Grand Opening of their second location tomorrow, September 9th on Appalachee Parkway, located right under Corner Pocket. Before we dive in to all the details, let’s take a look at how the Munchie’s Pizza story, another one of our viral sensations, evolved at the Tallahassee Foodies Facebook group…

This was a Tallahassee Foodies move very well played! Before Covid, our Tallahassee Foodies Facebook group welcomed restaurants to come in and share a “one-time intro post” only. Eric Riser, owner of Munchie’s Pizza near campus, used that intro post VERY wisely! After studying members’ requests for a deep dish pizza for a while, he knew it was time to move on from research and dive all in on the development. Next thing we know, he invited Tallahassee Foodies members originally from Chicago to come in, test out his trial Chicago-style pizza creations, and offer him some legit feedback!

Eric said of the Tallahassee Foodies response, “My interest in creating a Chicago style deep dish started about a year ago when I kept seeing members ask where could they get one at the Tallahassee Foodies group. Once my restaurant really slowed down due to COVID, I had a lot of free time and needed a solution to our sales problems so I began working on it.”

Because he involved the group, and we were able to watch the evolution of this process play out, and because there was clearly a demand for this pizza, by the time he offered his deep dish, there was an immediate three day waitlist! Eric’s pans, oven, and staff were all at max capacity!  Eric said, “We released it a little too soon because I was getting a ton of messages from foodies members asking for this pizza, but we only had two pans. It took a couple weeks to get the pans we are using now.”

While slammed, he somehow found a little extra time to do further R&D, seeking solutions to all things that caused a bottleneck, knowing he needed to get these pizzas out as quickly as possible. “Before we released the deep dish we were really struggling. Three weeks later I’d hired 10 people total. Now we were struggling to keep up and looking for room to grow.” What’s most impressive about this, to me, is that he is putting 10 people to work, DURING A PANDEMIC, thanks to your support. I don’t mean to raise my voice about this, but that’s pretty dang impressive!

The first Munche’s Pizza location was barely a year old when pandemic hit! Eric said, “I didnt have a bunch of money to open my business, nor did my family to help me. It was a gamble and I risked pretty much everything.” Eric has credited the group for not only helping his restaurant survive, but thrive, during the pandemic. “Our new pizza, the stuffed Chicago style deep dish combined with the attention it got on the Tallahassee Foodies Facebook group is what led to our ability to expand during the pandemic. I always planned on a second location, but even without COVID, we were still two years away from one.”

Eric says, “The second location will mirror the first for the most part. The big difference is the outdoor seating and we will eventually offer full-service dining. The extra space in the new location has also allowed us to start looking at adding pasta to the menu.” I’m thrilled because this location is closer to my home and we have pizza every Friday night, so I’m sure his pizza, garlic knots, and cinnamon sticks will be included in many of our upcoming movie and pizza night festivities! Oh, and before I forget, they now offer personal size deep dish pizzas, AND both sizes are now available as part of their regular menu going forward.

When I thanked Eric for the interview he said, “You’re welcome, but really thank you. Again I can’t express what you and your group have done for my family and I.” I wanted to pass that along to you all because really, this is a community effort. I always want you all to know that what you’re doing is making a huge difference in people’s lives. Your time and money is very well spent, my foodie friends!

Once upon a time we were The Mann’s Doghouse group, then the Munchie’s deep dish pizza group, and months later, Munchie’s Pizza is still going strong, along with La Tiendita’s birria tacos and those amazing Love Gurlie’s deep friend Oreos that landed us all on the Today Show! Who’s next????

In case you missed it, we’re hosing a giveaway for Munchie’s Pizza. They’re giving away 3!!! Chicago style deep dish pizzas!