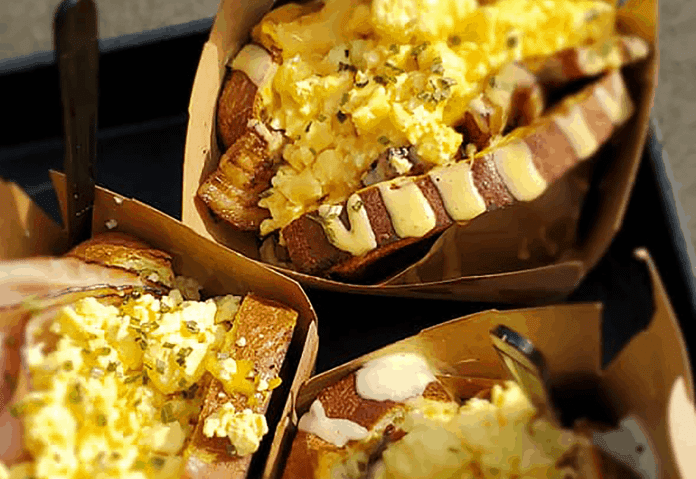 To all of my fellow breakfast lovers out there, you’re in luck… From the owner of Tally Mac Shack and SlideHustle, please welcome Justo Cruz’s latest creation, Eggcitement, a fun new breakfast food truck located on Florida State University’s campus. Yep. You read that right. Food truck! And it gets better. They specialize in “monster” handcrafted breakfast sandwiches – I’m talking heaping fluffy eggs between the Hawthorn Bakery’s brioche bun, toasted to perfection.

If you’re like me, where no breakfast is ever complete without a smooth cup of java, order some locally brewed Lucky Goat Coffee. They opened their doors window on August 31, 2020, and the attention they’ve already managed to garner up is unsurprising. But then again, what else do you expect from the notable Justo Cruz, owner of Tally Mac Shack (which was named Tallahassee Food Truck of the Year in four different contests), SlideHustle, and now Eggcitement, located at 1108 West Call Street!

I’m sure you’ve all heard of Tally Mac Shack, a concept that came to fruition back in 2017. Cruz says he traded in his Nissan Armada for a “bare-bones Frito Lays Chip Chuck with the idea to custom-build and launch a specialty food truck.” Fast-forward a year later, the popularity and high-demand for Tally Mac Shack’s delicious food resulted in a brick-and-mortar restaurant located at Happy Motoring. Not too long after, “SlideHustle” was introduced at Deep Brewing, specializing in gourmet sliders.

Their newest venture simply provides another option for tasty food in an area of campus that lacks options for dining. While I wish they had longer hours for those who dread waking up early in the morning (okay me, I mean me), the high volume of virtual classes means that there are few classes on that part of campus after 10 a.m., thus why Eggcitement’s hours are only Monday-Friday, 7:30 to 10 a.m.

Don’t let their track record of success fool you. Expanding and opening a new restaurant during a pandemic is no easy feat. “In addition to all the things you need to launch a new business,” says Cruz, “now we have to also put extra safety measures in place, including masks, social distancing, and next-level sanitation around the clock.” In part, this expansion was made possible with Florida State, whom Cruz can’t thank enough for trusting him with this egg-citing new concept!